The Homecoming Dance has been rescheduled for Thursday, October 10th from 9:00pm-11:30pm. We had to reschedule to allow students additional time to turn in the dance agreement forms that are now required by our district; these forms are required before any student can purchase a ticket to any dance.

If you have already turned in your form and bought your ticket, no problem! Mark your calendars for October 10th.

We just revived our Homecoming Dance tradition a few years ago…and it gets better every year! Let’s keep it going!

McKay Culinary would like to thank all who came out and supported our students in the 5th edition of the Saturday Market Community Chopped Challenge. Students from all 5 schools with culinary programs competed. McKay students who competed include Mena Drakeley, Drake McKeever, Kesi Thissel, Nathan Wollard, and Riley Ross Jacobson.

The winning team consisted of Gabe Ingersol (South Salem), our own Nathan Woolard and Riley Ross Jacobson representing CTEC Culinary. Congrats to all foer making this event a great success!

McKay Alum Dave Brundage led the Sacramento River Cats to  the National Championship. Congrats to  to him and the Salem Keizer Volcanoes for the great success. Click here to see the full story.

The School Dance Information and Agreement Form (English & Spanish) will be in the main office for students to pick up.  The Dance Agreement Form needs to be signed by parent/guardian and turned in completed with $5.00 to the main office to get your tickets.  Make sure to swing by and get this turned in prior to the dance.  A ticket is required to enter the dance.  There are no guest passes available for the Homecoming dance.  The dance will be from 9:00-11:00 PM on Friday September 27th.  We look forward to seeing you there! Go Scots!

Before presenting diplomas to eight McKay graduates at the September 10, 2019, school board meeting, Principal Schoepper took a moment to recognize the teachers, mentors and administrators who helped these students reach their goal. The McKay graduation team were all presented Spotlight on Success certificates by School Board Chairperson Marty Heyen.

Eight diplomas were awarded to new graduates from McKay High School last night at the Salem-Keizer School Board meeting. The students are our final eight graduates in the Class of 2019.

Each student was called one-by-one to the front of the board room. Principal Rob Schoepper handed new graduates their diplomas, and they shook hands with Superintendent Christy Perry, school board directors and McKay staff. After that, the beaming graduates showed off their diplomas and celebrated with their proud families and friends.

The new graduates didn’t have enough credits to graduate with their peers on June 5 or in the summer on August 1. To help them across the finish line, McKay launched an Extended Credit Recover Program last month for the eight students. They needed from .5 to 3 credits to graduate. All eight attended class at McKay in August to reach their goal of graduating.

Before the diplomas were awarded, Schoepper praised students and thanked the McKay graduation team.

“I have to say the students earning diplomas tonight worked very hard over the summer,” Schoepper said. “They never gave up and put in the effort needed to achieve this important accomplishment, supported by a terrific McKay team. As principal, I want to thank all of you for your work and sacrifices this August. It means a lot.”

With the addition of the eight graduates recognized last night, a total of 2,786 students, which includes 120 students who earned GEDs, graduated from Salem-Keizer high schools in the Class of 2019.

Please see the attached document below for the requirements to graduate with the Oregon State Seal of Biliteracy. 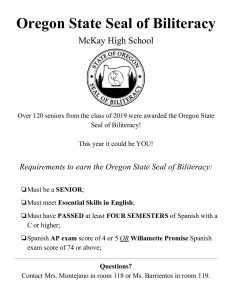 Our vision is ‘Every student graduates college and career ready.’  As we get the new school year off to a successful start, it is important to address this issue of chronic absenteeism.   Last year one in three students at McKay were considered chronically absent.  This means these students attended less than 90% of the time. This impacts student learning and achievement at a foundational level and results in fewer students walking across the graduation stage.

Here are some key findings:

It is important to note that research has shown a correlation between student attendance in school and work attendance later in life.  Habits built throughout a student’s K-12 career is carried into adulthood.  This also connects to employability.  Missing class results in missing important skill development for success after high school.

As principal, I want to challenge us as a community to do better.  We have strong attendance systems in place this year to address this issue.  We are also celebrating our students who meet or exceed our target of 90% attendance.   We realize that it requires a school-home partnership to ensure our students are fully supported.  I am asking us to work together to improve attendance at McKay.  Please work with us by communicating with your student the importance of regular attendance and getting to school on-time.

If you want to discuss the importance of regular attendance or resources we have available to support students and families please call me directly at 503.399.3080. 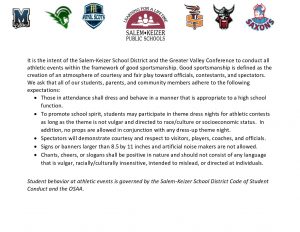